«Nikos is a very common Greek male name; it derives from the name Nikolaos or Nicholas which means victory of the people, as it comes from the Greek words “nike” (victory) and laos which means people.» from https://www.greek-names.info/nikos/

Victory of the people

How many Nikos’es do I know? «Stokke Nikos», «Lure Nikos», Nikos Ouzobaren and and … If you have a Nikos friend or more, send him a greeting, he will be cellbrathing! Here is a bit more from greek-names:

Most churches in Greece who has the name of Agios Nikolaos is situated close to the sea, or for sure in a city that are by the sea.

I have been making sweets: 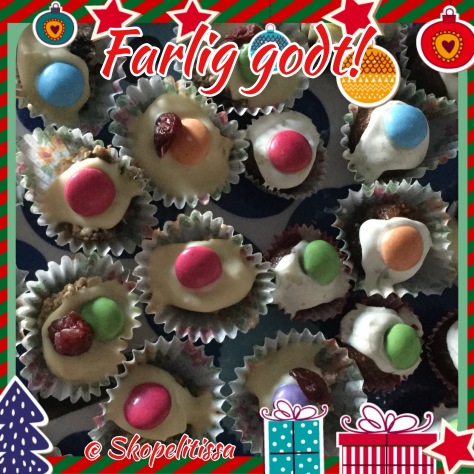 I picked up a receipt last year from a magazine, but it was very sweet! So now I put almonds and dry fruits in the blender, then over in these small paper cages, then I melt white chockolade and poor over and finally decorate with a M&M and/or an almond or a cranberry, dangerousely good!

The weather has be so nice and mild, but last night it changed. Now at 16.30 on Tuesday it is only 10C outside and a cold wind, it was up to 8 Beaufort earlier.

Here we measures the wind in Beaufort:

«The Beaufort scale /ˈboʊfərt/ is an empirical measure that relates wind speed to observed conditions at sea or on land. Its full name is the Beaufort wind force scale.» https://en.m.wikipedia.org/wiki/Beaufort_scale

The scale goes from 0 to 12. If we have 8 here, most boats are not allowed to travel. In the summer it may happen but in the winter, for sure it happens!

In my garden now:

I do not think I showed you all from Athens, we were there 12th to 14th of November in order to get new passport at our ambassy, and yes, we got them. We also surpriced Mathilde, my friends daughter, her tears started running when she saw me!!! Here are some of the good memories:

The consert at this big place was so great, – when were I last in a consert hall? Hundred years ago? For sure in another life. Tina had chosen and it was ABBA and Queen’s music by the Greek radio orcestra and a big choir from Thessaloniki, just fantastic!

The taxideiver was a nice woman and we agreed that she next day should take us to Sounion:

Cape Sounion is noted as the site of ruins of an ancient Greek temple of Poseidon, the god of the sea in classical mythology. The remains are perched on the headland, surrounded on three sides by the sea. The ruins bear the deeply engraved name of English Romantic poet Lord Byron (1788–1823).»  https://en.m.wikipedia.org/wiki/Sounion 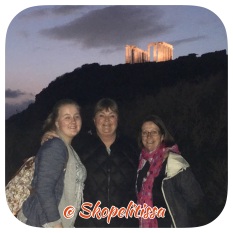 The cape Sounion is more or less the reason that there are no ferries between us and Athens, it is a long detour. Also one has to pass the island of Evia, Greeces 2nd biggest island!

The two days in Athens was so great, in such a nice company. Fun to be two mothers and two daughters, between 18 and 89!